Hip replacement in India is a surgery that is performed by a very skilled orthopaedic surgeon. In this surgery, the Orthopaedic Surgeon removes the painful hip joint of the patient and replaces it with a prosthetic implant. Hip replacement surgery is a surgical procedure, that is, a hip prosthesis.The average Cost of Hip Replacement Surgery in India starts ranges 4 Lakh to 7.5 lakhs according to the present rate. It depends upon the partial and total hip replacement surgery. But Hip Replacement Surgery cost at Srikara Hospital starts from 1.5 Lakhs .

This can be performed as a total replacement or a Hemi (half) replacement. This surgery is generally conducted to relieve arthritis pain or in some hip fractures. The hip replacement surgery cost in India is comparatively affordable among other countries. The surgery will be allowed only when there is no alternative medicine that can be consumed by the patient for relief from the pain of a faulty or diseased hip joint.

What is Hip replacement surgery? 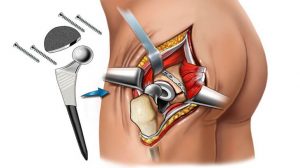 Total hip replacement surgery, also called total hip arthroplasty, is a surgical procedure conducted to replace the damaged or diseased hip joint with an artificial joint or prosthesis. Most often made from metal and plastic components. It usually is done when all other treatment alternatives have displeased to provide satisfactory pain relief. Some other causes of hip pain also may pave the way to get a hip replacement in India as a measure to reduce the pain and increase the mobility of the patient. It is increasingly common to see many athletes that have strenuous exercise routines requiring to undergo the replacement surgery in the best hospitals for hip replacement surgery in India so that they can play the sport again without any concern. The one who undergoes the surgery can after enjoy biking, hiking, swimming, golf and other activities, again. Being able to move with less pain is a definite benefit of hip replacement surgery.

One of the most common causes of hip pain is arthritis. The other more natural cause is body weight. A bulky person will be advised to undergo hip replacement in India if the doctor feels that the hip is getting dislocated because of the incorrect posture of walking. Another problem that can present is the presence of small hip fractures is the hip bone. These are mostly because the patient’s bones become brittle and weak as they age. Fractures of the hip joint or the soft tissue padding may also require a hip replacement. The three major types of hip replacement are:

Total Hip replacement surgery: Hip replacement surgery is a safe and effective procedure that can relieve your pain, increase motion, and help you get back to enjoying normal activities. In a total hip replacement (also called total hip arthroplasty), the damaged bone and cartilage is removed and replaced with prosthetic components. The damaged femoral head is removed and replaced with a metal stem that is placed into the hollow centre of the femur. A metal or ceramic ball is placed on the upper part of the stem. There are two major surgical approach methods for performing a total hip replacement: the posterior approach (more common) and the anterior approach

Hip resurfacing: Hip resurfacing of the femoral head and socket is most commonly done in younger, active patients. This may be used in the treatment of active patients with end-stage pathology of the hip joint. The major difference as compared to conventional hip arthroplasty is that resurfacing arthroplasties have femoral components with larger heads and smaller stems, allowing improved cup stability and preservation of more of the proximal femur.

Some of the types of implants that patients can choose from are:

When a Hip replacement surgery is necessary?

Pain around the hip or groin area can be one of the major indicators that there may be an underlying problem with your hip joint. Pain occurred while walking, during exercise, pain at night etc. Also, stiffness occurred while wearing shoes or socks are some signs that need a hip replacement. While several conditions can cause hip pain, hip replacement is reserved for individuals with extensive hip damage. The conditions that commonly require surgical intervention are:

At Srikara Hospital have a special team of nurses and duty doctors to monitor the condition of the patient till they wake up from the anaesthesia and then monitor for a few more hours. Once the doctor is convinced that the patient is healthy, and has no problems after the surgery, the patient is shifted to their room. This is where the patient will stay for a few days after the hip replacement. Usually, the patient will be encouraged to stand and walk on the same day after the surgery. This will be under the care of a doctor and with support equipment like crutches. Most of the drips will be removed after a day or two. The hospital has our own physiotherapists that will visit the patient and guide them about how to go about their daily routine once they are discharged. Most patients go home within a week’s time after the surgery.

Why Choose Us For Hip Replacement Surgery?

Consult now or Get a second opinion, by our Orthopaedic Doctor